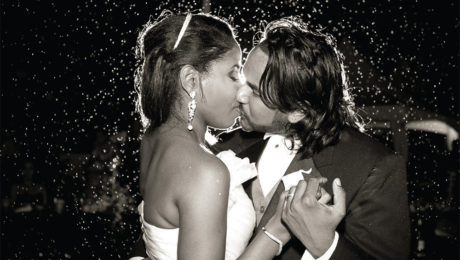 At Roytec, where they were both students, Alana and Taurean were put into a study group by one of their lecturers. After two years of going steady, they became proud parents of their daughter, Lauri, and decided to get married one year later.

Taurean, in his own words, decided to be “intimate and corny” and chose New Years Eve 2011 to ask Alana to be his wife. Armed with an engagement ring, Taurean proposed under a backdrop of celebratory fireworks and waited all of two seconds for Alana’s enthusiastic “yes!”

The couple chose the backyard of Alana’s mom’s home in Point Fortin, known for its starry nights and panoramic view of the Gulf of Paria. They even named it Clifton Hill Manor before sending out their invitations!

Set against the ocean, aisles lined with white blossom trees led up to a pergola, designed by the groom, under which the couple exchanged vows.

The evening cocktail area was reminiscent of a sunset and featured purple lotuses with black and yellow linens. To mark the transition from evening to night, the couple designed the open-air reception area with black linens and contrasting fuchsia and apple-green accents. Tall cylindrical vases of crystals, LED lights and green apples surrounded shorter vases of pink tiger lilies and green foliage.

Taurean constructed a parquet dance floor which was decorated with ambient lighting. The deco trees styled to resemble weeping willows, set off by pink and green lighting, created a light and whimsical feel. The couple even used Alana’s mom’s dining furniture to remember their special moments every time they looked at her chairs.

Alana visualized her bridesmaids looking like ‘garden fairies with lots of tulle’—and got exactly that! The girls wore short, black dresses cutely accented with fuchsia pumps. Taurean favored a sharp, clean look for his groomsmen and chose classic black suits that featured fuchsia ties, except for the Best Man who wore a lime green tie.

The 3-tier fruit cake, designed by the creative couple, was fashioned with a polka dot ribboned base and simple pink and green flowers at the top.

Alana and Taurean chose their music tracks to reflect their personal taste and special moments in their relationship. As the couple’s entry was announced at the reception, two moko jumbies (the decoy bride and groom) sauntered in, followed by the real couple.

Their first dance was a Bollywood piece, Pehli Nazar Mein, during which the couple twirled under a display of fireworks and softly falling rain. Romantic moments over, it was time for serious partying. Carnival was less than two month’s away, so not only was there a popular soca artist, but a rhythm section and a tassa band as well!

Dedicated family and friends, a keen spirit, and a great photographer! The couple recounts that hospitality should be at the forefront, as guests should be well-taken care of and given no reason to complain, and items such as entertainment and food should be well thought out. They also advise keeping a box of safety pins handy, as so many people asked for them on the day!

The couple risked having a completely uncovered, open-air event. Despite a brilliant sunrise, at around 10 am on the wedding day, the weather changed. A massive scramble of people, tables, chairs, centerpieces and every possible item of décor ensued, with everyone trying their level best to prevent any damage from the rainfall. Taurean entered nervous breakdown mode and locked himself in a room where he listened to the rain pour. At one point, the winds were so strong, trees and furniture got blown away, and they even experienced an electrical shortage in one part of the building. Meanwhile, the bridesmaids simply closed the blinds as the bride also suffered major panic and exclaimed, “He should have used the tents!” It was, officially, a disaster.

But, the couple’s amazing family and friends took action and transformed the catastrophe into a manageable situation—they washed, dried, and reset the linens not once, twice but three times during the course of the day. Then, five minutes before the ceremony started, the groom and groomsmen were still scrambling about trying to figure out which trousers belonged to each of them as all the suits had been laundered together!

Almost to the end of their eventful day, the newlyweds danced in the rain to their favourite song, hair flopped and soaking, under the fireworks. To them, it was perfect. 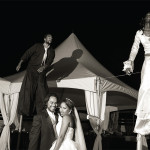 ‘Decoy’ couple (moko jumbies) with the real pair at reception 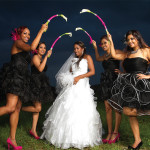 Bride with her bridal party at reception 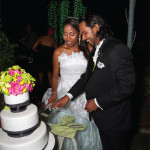 Newlyweds during their cake-cutting 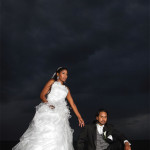 Alana and Taurean take a breather after their eventful wedding 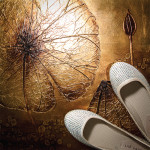 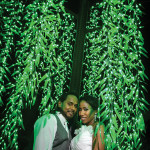 Alana & Taurean – This couple braved the odds on their wedding day with style and flourish! 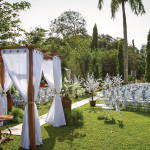 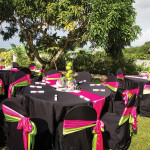 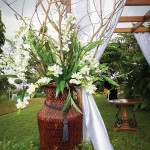 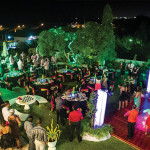