Nichola and Dion got married on the Tobago Princess (day cruiser). The boat is famed for its scenic coastal trips to Bon Accord Lagoon, No Man’s Land and the Nylon Pool. The bride confided that Tobago is her secret love, and she wanted that fun wedding with a difference.

The bride wore a white two-in-one dress with lace and bead details; she’d spotted a dress just like it and fell in love with the idea. The dress was put together by The Bridal and Curtain Shoppe. Her mother added some finishing touches and sparkles to it. The white hair-fastener veil was handmade by the bride.

The groom wore a dark grey suit with a crisp, white French cuff shirt; the suit was tailor-made at Saville Row in St. James.

The couple opted for a beach-slippers-in-sand initialled cake to complement the beach theme. They felt that the relaxed, casual feel represented their vibe as a couple.

The couple invited several relatives from abroad so it was important that they incorporate local cuisine. Their cocktail reception included samplings of roti, curry crab and dumpling, corn soup and cheeseburgers.

The processional songs were Pachelbel’s Canon in D and Black Eyed Peas’ Let’s Get it Started; the soundtrack for first dance was Etta James’ At Last; the song for mother and son dance was Boyz II Men’s Mama; the father-daughter dance song was The Temptations’ My Girl.

The couple opted for a Carnival Cruise Lines’ honeymoon, which best satisfied their need for a good mix of romance, adventure, sightseeing and relaxation. They went on a five day Western Caribbean cruise to Key West, Florida and Cozumel, Mexico. 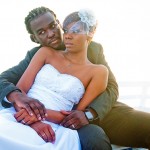 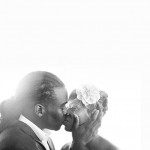 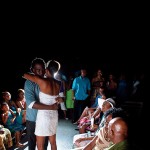 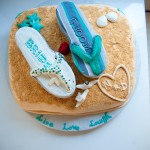 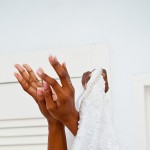 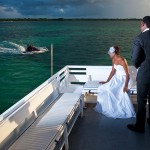