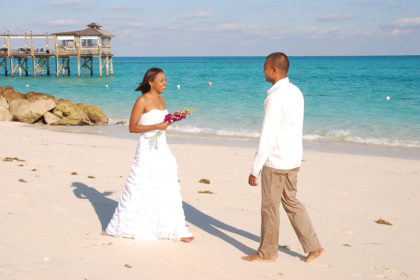 Diana and Ron said “I Do” in Nassau, Bahamas.

The Bride answers your most pressing questions:

CB: Why did you choose a destination wedding? What were your main considerations?

Diana: We wanted a non-fuss, simple, intimate ceremony, especially since we wrote our own vows; the thought of a crowd of people staring at us at such a sacred moment didn’t seem very romantic.

A beach setting was also high on the agenda (sand between our toes) and since we were honeymooning in the Bahamas, we thought why not have a wedding-moon; after all the Bahamas does have some of the most amazing beaches.

CB: Why did you choose Sandals?

Diana: All-inclusive and no children allowed – what could be better? Sandals took the worry and hassle out of planning the wedding. We merely informed them of our preferences for the day. Everything you could possibly need for a wedding can be provided: the bouquet, groom’s boutonniere, cake, champagne, minister, photography and even the DJ. You can also access a glamour team to help you look extra special.

We’d considered both St Lucia and the Bahamas, but decided on the Bahamas mainly because the resort had an offshore island also equipped with a pool, restaurant and bar – which was great for the honeymoon! You had access to the offshore resort plus the main resort.

CB: Where did you get your dress?

Diana: The resort also supplies a collection of wedding dresses. However, I found my dress at Megans in Trincity Mall, Trinidad.

CB: Can you describe the sequence of events on the day?

Diana: We had a morning ceremony on the beach (several locations are available), after which we had our first dance on the sand (which was magical; there were no piercing eyes staring at us to make things awkward), followed by an elaborate photo-shoot throughout the compound, with the sticking of the cake as the finale.

CB: Would you do anything differently?

Diana: The weather was a little too cold for my liking (we got there on March 22nd) – if I had to do anything differently I would have planned it one month later.

CB: What were the highlights of the honeymoon?

Diana: We’re an outgoing and adventurous couple so relaxation alone would never satisfy us, though we did a lot of that. We needed an adrenaline fix, which we got with parasailing. Every time we travel we try to do something we never did before. 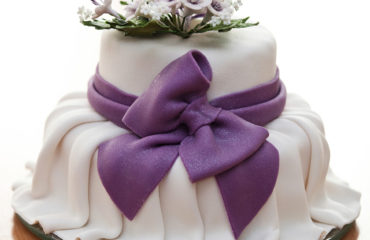 What cake designs are couples choosing?

What can I spend?